Home > Blogs > Reflections on fieldwork conducted in Manaus, Boa Vista and Pacaraima, Brazil, in the context of the project Redressing Gendered Health Inequalities of Displaced Women and Girls in Contexts of Protracted Crisis in Central and South America (ReGHID). May 2022 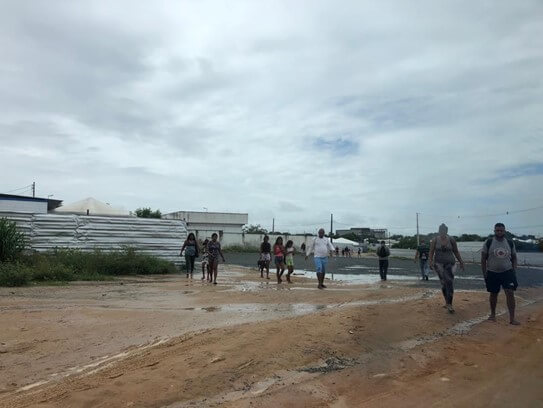 Doing research on displacement: reflections on research and researchers’ positionality
By Pia Riggirozzi (Professor of Global Politics in the Department of Politics and International Relations, University of Southampton. Principal Investigator of ReGHID)

I have worked on issues of inclusive development and governance for development for two decades. Most of my fieldwork has been in contexts of deprivations of all sorts. I have focused on political economy of the right to health -and human rights and development more broadly. I developed an interest on gendered injustices and dignity as an approach to inclusive and sustainable development. Now, working in the context of ReGHID with displaced women and girls I had the opportunity to learn about the complexities of inequalities, inclusion and governance. During fieldwork in Manaus, Boa Vista and Pacaraima, where most Venezuelan migrants settle, even if temporarily, taught me a few extra things. First, that location matters for how displaced women and girls experience belonging, hope, care and survival. Displaced people’s social, historical and political location is very different from other populations in poverty and vulnerable situations. History, location and social belonging define identities and standing in society. For many displaced people the social, historical and political location is distorted, fuzzy and changing. Their needs in constant fluctuation, redefined by why they travel and how, conditions during the journey, the many risks and harms they experience in the transit and arrival in a new place, who receives them and how they are perceived in host societies – themselves shaped by poverty and inequalities. So doing research with people on the move is challenging but needed. Most of the women and adolescent girls I met with are very poor and live in the margins of society – that in itself creates distinctive vulnerabilities and challenges for respect and acceptance in health systems too. Second, respect and acceptance of migrants are tight to arbitrary understandings of responsibility. Who should care for (irregular) migrants? Perceptions of responsibility are often affected by a sense that irregular, poor, needy migrants are not only population that are at risk but also that create many risks to societies where they arrive at. Violence and discrimination are consequence of that. I have seen a person (a local) pointing an accusative finger at a family of migrants who was sitting on the pavement with their bags, waiting for shelter perhaps. Have also heard discriminatory claims about the amount of children these migrant women have, the amount of alcohol they consume (and how there must be something genetically different in some of them, particularly the indigenous people, given the effects of alcohol in them). Being migrant for many women and girls is being judged. Finally, protection is contested and conflicted in its meaning and practice. Many agencies and even health systems gatekeep rather than protect or impose their own views on what health needs and urgencies should be for these women and girls. There is a clear tension between humanitarianism and control defined by who established what is urgent and needed, what is risk and at risk, creating power relations that undermine autonomy and agency of migrants whose voice, and many of their health needs, tend to be ignored.

Finally, while some of these issues preoccupied researchers for decades and resulted in their awareness of hierarchies, particularly in fieldwork, there are fundamental issue of power relations in migration research– but not only– that raises serious questions about researchers’ positionality in fieldwork, field relations and knowledge production. Our identities, motivations and experiences as researchers are important and define the choices we make when we engage in social and political spaces. It is important to ground research and researcher in the field and through fieldwork. But that engagement needs to examine the power relationships between the researcher and participants/subjects of research.

Researchers committed to change and redress injustices and inequalities will try to break barriers and modify the context and conditions that reproduce injustices experienced by migrant women and girls. But in the process, there are serious risks of overlooking what migrants need, want and experience over what researchers think is urgent and needed. Who defines what is urgent and needed engender power imbalances and hierarchies in knowledge. If not careful, well-intentioned, committed researchers can reproduce, through positions of privilege, more harm than good. Researchers are no heroes in the story, nor are saviours or social services.  Yet, we have an important social, political and ethical role to play in making visible and giving voice to what and whoever  otherwise would remain at the margins of knowledge, politics and society.

Research in humanitarian crises: What (and whose) sadness matters?

I have been working with and for refugee and migrant individuals and communities for over 8 years, either as a lawyer, an activist or researcher. In most cases, I dismissed my own emotions and feelings towards my practice, advocacy and research and centred those of people on the move instead. Indeed, while talking with forced migrants and studying about displacement, our own emotions pale in comparison to forced migrants’ own experiences and emotional traumas. When doing fieldwork, for instance, no matter how difficult or helpless it is for the researcher to witness and hear about the various injustices forced migrants go through, one’s own feelings towards this should not be the centre of reflexivity, especially considering forced migrants’ emotions and traumas are hardly ever the object of scholarly and methodological work. Some necessary questions are hardly ever addressed, for instance: Are migrants emotionally fit for interviews? How do migrants feel when researchers observe their work?

This felt especially strong for me when recently going to do fieldwork in the Amazon region of Brazil, where Venezuelan migrants are mostly concentrated. Due to the COVID-19 pandemic, the ReGHID qualitative research team conducted most interviews with displaced women and girls virtually, without having the opportunity to see and interact in the same spaces those women inhabited and survived, which could impact the depth of the upcoming analysis. As such, in May 2022, we took the opportunity to go to and observe those spaces, as well as speak to as many displaced women and girls as we could, in order to better understand their stories, and their feelings. We visited Manaus, Boa Vista and Pacaraima, and shelters in each city. One thing that became evident is that positionality matters in research, even more in situations of crisis. How we positioned ourselves in these brief encounters could affect migrants’ expectations, hopes and even feelings of being abandoned. Their feelings should be at the centre of how we behaved towards them – they are not (exotic) objects of study – as subjects of rights and dignity in the spaces they inhabit.

In one case, for instance, we visited a couple of shelters accompanied by the Brazilian Armed Forces, who coordinate and has decision over who visits those shelters, or not. How were we being perceived as we entered accompanied by men and women in military uniforms? How did that make migrants feel? I was particularly worried of not making them feel like aliens, distant objects of scrutiny due to racial belonging, their culture, and their situation of poverty.

Shelters are highly controlled environments that add a new layer of complexity to how our presence there could be perceived by migrants – after all we were allowed by the gatekeepers to come in; so there must be a reason and we must be important in that system of protection/control. We must be wary of migrants’ perceptions and feelings. Disregarding and ignoring that risks dehumanising research.

How we dress, what we carry with us, who we speak to, how we address displaced communities, if and how, and who we take pictures of, in those spaces created for both the protection and the control of incoming migrants, have enormous ethical challenges and trigger a range of emotional responses that we should consider before going in and once inside the shelters.  This is ethical as much as sensitive to the displaced communities’ feelings, observing the principle of do no harm.

What about the researchers’ feelings? Emotional sensitivity can be key for a continued observation (and change) of the researchers own positionality during and after fieldwork, of their effects on others, and for creating trusting environments. An emotionally sensitive researcher can do important, respectful research that does no harm and that seeks to produce impact in the everyday lives of the research participants. Contexts where research participants are in very vulnerable positions and situations can cause the sort of helplessness on researchers that has however to be watched – although sensitivity is welcomed, the researcher has to pay attention not to centre their own feelings over that of the participants; if their emotions impede the flow of interviews, for instance. At the same time, this should not create emotional detachment, considering it can produce the type of violent interactions with participants that the researchers should avoid. Processing one’s own responses to the emotional weight that normally comes during fieldwork is therefore important to learn one’s own limits, triggers, and how to address them in order to place the participants’ feelings at the centre of research, not their own. It can also be an interesting tool to revisit these feelings in the analysis stage of the research. A safe space for processing these feelings, especially amongst researchers, should be nourished throughout the many stages of research. Luckily, in ReGHID, we have one another.