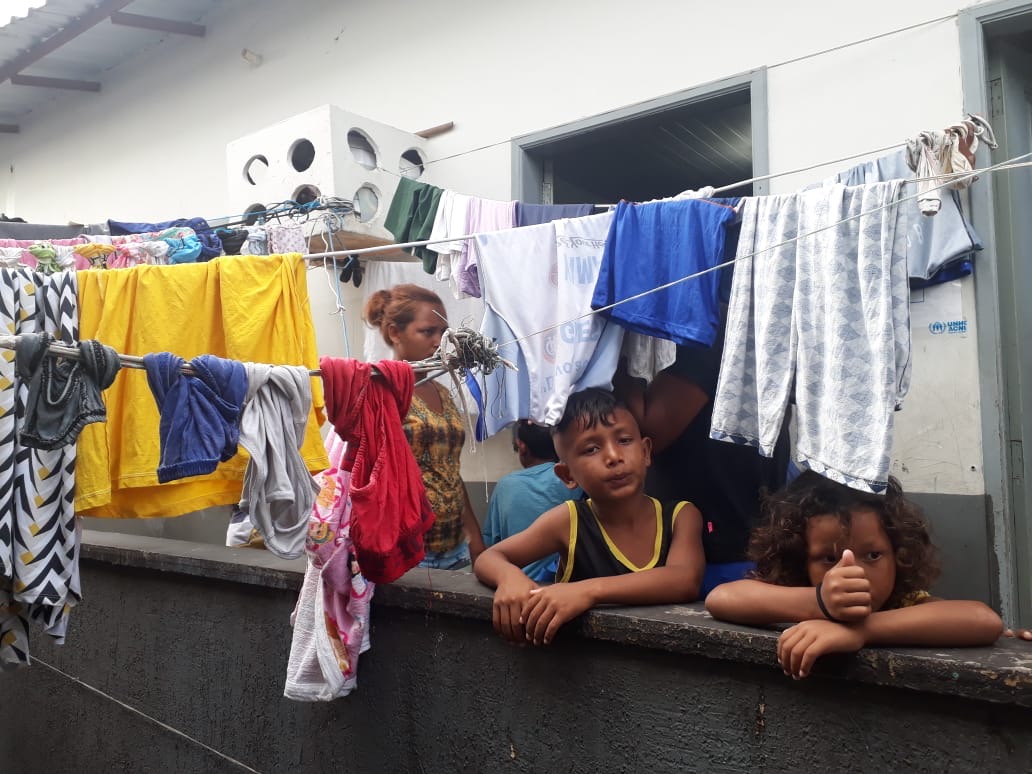 Displaced women and girls in Latin America threatened by COVID-19

Health emergencies exacerbate almost every form of social injustice in the global South. State biases, governance failures and inadequate and inappropriate policy responses leave legacies that can be as bad as the disease itself. In situations of crisis, public service provision and access to health and welfare services can rapidly deteriorate. The impacts are greatest on the already vulnerable, including poor women and children, ethnic minorities, displaced people and the long-term poor. Communities and people displaced by war, conflict and violence are exceptionally vulnerable to COVID-19, as The Lancet recently noted. With physical distancing almost impossible, and access to crowded housing and shared water supplies, policies based on quarantine and ‘sheltering at home’ are of very limited value. For displaced women and girls, who account for around 50% of displaced people, and whose needs are invisiblised even in ‘normal’ times, the health risks posed by COVID-19 are huge.

Pandemics are not gender neutral. We know from previous outbreaks such as Ebola, Zika and SARS that they reinforce gendered roles of care and reduce access to sexual and reproductive health services, either because of shortages of supplies, medicines and specialist health care workers or because resources are redirected in times of crisis in ways that reflect away the priorities of (generally male) policy makers, rather than the needs of women. Levels of domestic and gender-based violence rise. For displaced women and girls who often rely on relief and humanitarian organisations for accessing gender-based violence services and counselling, sexual and reproductive health information services, HIV and sexually transmitted infections tests, contraception, abortion, and gynaecological care. COVID-19 may well deprive displaced women and girls of the essential protection services they depend on and exacerbate the risks they already face to their wellbeing and lives.

How will COVID-19 impact on the health and well-being of this exceptionally vulnerable group? How should policy makers respond so as to minimise the immediate impacts and promote longer-term health needs of women and girls in displacement? We consider these questions in relation to the growing numbers of displaced women and girls in Latin America and as part of a call for redressing gendered health inequalities in displacement.

We suggest that international organisations and states of transit and abode need urgently to target resources to address the immediate and long term health needs of women and girls in displacement. A policy paradigm is needed based on both recognising the dignity of women and girls and state obligations to respect, protect and deliver human rights in ways that protect the health of vulnerable populations, and contribute to breaking cycles of deprivation and exclusion.

In the last decade alone, El Salvador, Guatemala and Honduras have seen the number of asylum-seekers and refugees northwards grow rapidly, to a total of 396,000 – an increase of 58% from 2016. In Venezuela, 5 million have left their country for Colombia, Brazil, Ecuador and the Caribbean since 2014. Women represent around 30% of the total of Central American migrants to Mexico, and 50% of Venezuelan migration to Brazil and Colombia.

These women and girls have often faced greater protection risks associated with violence, intimidation, trafficking, abuse, rape, sexual assault, as well as situations of discrimination and stigma, language barriers and differences in sociocultural norms, social exclusion and poverty. These risks may be increased due to internal and external travel restrictions, difficulties in accessing health services and medicines at border sites, in transit and in settlements, as well as a lack of documentation. Many work in the informal sector without social protection and take responsibility for children and other members of their households. Even without a pandemic, displaced people living as refugees, migrants or internally displaced due to conflict, natural disaster or extreme poverty, are often unwell and face immense barriers to accessing healthcare and sanitation facilities, in often over-crowded camps or shelters.

Take for instance Boa Vista, a Brazilian city in the northern state of Roraima and main gateway into Brazil for Venezuelans fleeing the ongoing economic, political and social crisis, including the collapse of health systems. The UNHCR reported that only 3 out of 13 shelters are currently considered low risk in terms of spreading the coronavirus. In addition, increasing numbers of Venezuelans are being made homeless following evictions and closures of shelters, impacting negatively on public perceptions of these refugees and migrants. Furthermore, restrictions to migrants’ access to healthcare services is deepening their neglect. Some responses from the federal government and international organisations have sought to address this, for example by setting up emergency ‘COVID-19’ centres, but the focus is on treating patients from the pandemic, rather than the provision of wider health services.

Health policy neglect is particularly worrying amongst indigenous women, such as those from the Warao communities, who are part of the thousands of Venezuelans that have fled to neighbouring Boa Vista, in Roraima. Poor health conditions and high prevalence of infectious diseases, particularly HIV, along with barriers to health service access due to cultural and linguistic differences, mean that COVID-19 could exacerbate an existing health crisis as well as bringing its own; the Warao shelter in Boa Vista is regarded as particularly vulnerable to an outbreak of COVID 19.

This is also true in Bogotá, Colombia, which hosts almost 20% of the close to 2 million Venezuelans in the country, has similar issues. Unable to afford local housing because of high rents, many Venezuelan migrants are now homeless. Accessing healthcare in normal times is already a major issue in Colombia, since the national health system excludes irregular migrants’ (around 20% of the displaced population) from non-emergency services, Additionally, rising xenophobia in Colombia means that Venezuelans are frequently accused of spreading COVID-19 throughout the country.

Both Brazil and Colombia have now closed their borders with Venezuela, with Colombia even returning a number of migrants to Venezuela in response to the outbreak. Brazil has passed a decree allowing returns, which are cases of violation to the principle of non-refoulement. This places displaced women and girls at an even greater risk. The denial of a place to stay also means the denial of their right to health. Restricted provision of refuge and asylum severely disrupts access to sexual and reproductive health services and to adequate medical care for the prevention and management of gender-based violence, at a time when it is most needed. If these harms are not redressed, the consequences for migrant and refugee women and girls will be catastrophic in terms of access to contraceptives, medicines and personal hygiene products, increases in unwanted pregnancies, lack of access to safe abortions, increased risk of maternal and infant morbidity and mortality, undermining every principle of autonomy, equality and dignity of women and girls.

Leaving No One Behind: the importance of human rights

In 2015, the Sustainable Development Goals (SDGs) promised the introduction of global development policies based on a meaningful engagement with the human rights of the poorest and most vulnerable. Even before the COVID 19 outbreak, there were serious doubts about the pace and direction of global change and commitment to the target of ‘leaving no one behind’. Governments cannot afford to ignore the rights of the most vulnerable, now during the pandemic if they remain committed to the 2030 agenda. As Sara Pantuliano, Head of the Overseas Development Institute, one the UK’s largest development organisations, argues, upholding human rights as a tool for addressing inequalities is essential, and the backlash against women’s human rights is a particularly critical faultline.

What does this mean for women and girls displaced by conflict, poverty and political harms? First, we need to recognise that COVID-19 is only the latest of the many challenges to their wellbeing. It is important not to forget how far their rights have already been stripped away, even before the pandemic. For this reason, it is crucial that we challenge the naturalization of gendered violence and invisibility displaced populations face. COVID-19 is not disrupting their otherwise ‘normal’ lives, so much increasing their dehumanization still further.

The solution? Placing the human rights of the most vulnerable, including displaced women and girls, at the very centre of policy responses. This requires commitment from governments to put in place resources needed to address the needs of the most vulnerable in the COVID-19 and deploy them in ways that mitigate their risks and uphold their dignity. For current and future policies, displaced women and girls need to be listened to and their perspectives incorporated into the responses government make to this and other development crises. Now, and after the COVID-19 crisis, we need a human rights-based approach to public health that directly addresses gendered global health inequalities, asserts the indivisibility of human rights, promotes the agency of vulnerable individuals and holds state authorities to account for their actions.

Governments in Latin America and elsewhere have legal and ethical obligations under international law to ensure the best possible provision of services for all. They cannot be allowed to choose which rights, or whose rights, to realise and which to ignore. We agree with the Lancet Migration that transparency and accountability in their policies towards displaced communities, as well as appropriate resources for gendered-sensitive responses are paramount in addressing COVID-19 and every heath crisis. As a response to the current crisis, we call for a suspension of all attempts, legal or otherwise, to limit migrant and refugee access to healthcare and an end of forced returns; and for governments to counter the xenophobia that undermines migrants’ rights to health and to work across borders to ensure that a full range of gendered health services reaches displaced women and girls now and in the future.