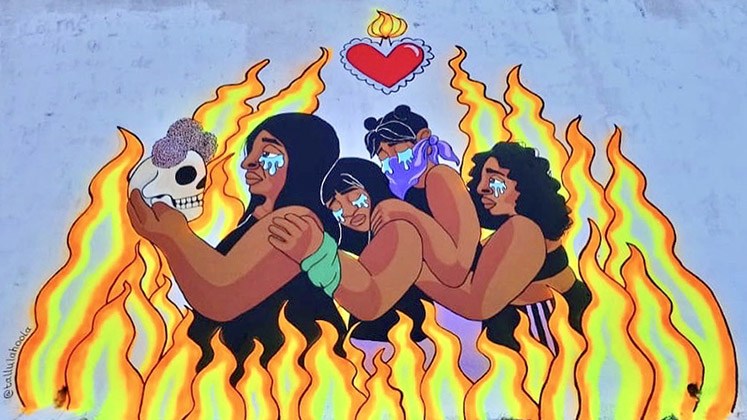 The Quintana Roo Feminist Network’s 94-day sit-in at the State Congress recently came to an end after legislators agreed to hold a vote on legalisation of abortion. Although that vote was lost, the decision will allow the movement to take the fight to the Supreme Court, which could have major ramifications for sexual and reproductive rights in Mexico.

In November 2020, members of the Quintana Roo Feminist Network (RFQ) walked into the State Congress building in Chetumal, Quintana Roo, and began what would become a peaceful 94-day sit-in to demand a vote on the legalisation of abortion (since abortion law is decided at state rather than national level in Mexico).

For 93 nights, they slept in tents or on thin mattresses spread across the hard, tiled floor of the building, its doors padlocked shut. Always foremost in their minds were the safety protocols that they had drawn up to deal with the very real possibility of intrusion by state or non-state actors. Most of those days and nights went by without electricity or running water after the state illegally cut the utilities. They juggled working remotely with homeschooling, childcare, and activism. They faced smear campaigns, defamation, provocation from anti-rights groups and worse. In December, the home of a prominent RFQ member was vandalised and even had a firebomb thrown at it.

Despite these challenges, the RFQ sustained their protest at the State Congress through legal, digital, and artistic activism until 2 March 2021. On that day, members of congress at last held a debate on whether to put the motion to legalise abortion to a plenary vote, with the vote itself then coming just hours later. Though the Congress ultimately voted 13 to 7 against legalisation, the very act of forcing a vote constituted a major victory. The RFQ has emerged stronger and more organised for the battle ahead as they join feminists from across Latin America in fighting for abortion rights.

Deciding how, when, and if we want children is a human right that should be guaranteed for all women and adolescents. Yet most girls and women in Latin America do not have access to safe, legal, and free abortion. Neither do they enjoy equal access to contraception or comprehensive sexual education. In the most extreme cases in Mexico – and elsewhere in the Americas – women face imprisonment for having miscarriages, and girls as young as nine can be forced to give birth even though abortion is legal for cases of rape across most of Mexico.

In Quintana Roo, the situation is especially worrying. The state has had the highest level of teenage pregnancy in the country for the last 11 years, and rates have only been increasing. In 2020, more cases of rape and human trafficking were reported in Quintana Roo than in any other Mexican state. During the first six months of 2020, cases of human trafficking in Quintana Roo increased by 265%, pushing it up from seventh to first place in this inglorious ranking.

Mexican feminism and the conservative backlash

The RFQ protest took place in the context of a feminist movement that is going from strength to strength in Mexico. So much so, in fact, that feminist activism has even been described as the country’s principal opposition movement. Within this movement, important gains are being made for women’s reproductive rights. Crucially, abortion was decriminalised in Oaxaca in 2019, making it the second state (after Mexico City in 2007) to allow abortion under any circumstance within the first trimester. Elsewhere in Latin America, Argentina finally legalised abortion in December 2020, although this is only the beginning of the fight to guarantee women’s reproductive rights in that country.

But as feminist movements gain rights for women, anti-rights actors are determined to cut them back. In August 2020, for example, the Supreme Court rejected an appeal filed by feminist collectives and human rights organisations in Veracruz which would have forced the state legislature to legalise abortion, with major repercussions for the rest of the country. In 2016, the then governor of Veracruz, Javier Duarte, ordered that the state’s constitution be changed to protect life from the moment of conception.

In Puebla, a sit-in that began three days before the Quintana Roo protest had to be abandoned after just 25 days due to threats against a member of the feminist collectives involved (Siempre Viva and Coordinadora Feminista). As a result of the feminists’ action, however, the state legislature has committed to a vote on decriminalising abortion in April 2021, though only time will tell if they make good on their promise.

There are indications that attempts could be made to restrict rather than improve women’s reproductive rights in Quintana Roo as well. Congress originally agreed to debate the motion for legalisation on 24 February, but this was abandoned due to congress members’ repeated attempts to stall the discussion. Some even tried to edit the proposal in order dilute women’s rights even further: one legislator suggested that a woman should be legally obliged to continue a pregnancy if the potential father was opposed to its termination, but thankfully this proposal was rejected.

From Quintana Roo to the Supreme Court

In the end, RFQ agreed that they would terminate their sit-in once the motion to legalise abortion had been debated by the state legislature. And so at 9pm on 2 March, following a frenzied dash to remove their belongings, dozens of feminists gathered outside on mattresses and blankets to watch a livestream of the vote projected on to the walls of the State Congress.

Despite the negative outcome of the vote, RFQ members were jubilant. They reminded the crowd that for five years Congress had refused to even debate the motion of legalising abortion. The goal of the sit-in was primarily to ensure that this debate happened, because the negative vote in the plenary session has a positive consequence: RFQ can and will file an appeal arguing that the Quintana Roo State Congress acted unconstitutionally by denying women’s rights, and so the motion will move up to Mexico’s Supreme Court.

Far from being over, the campaign to guarantee the rights of Mexico’s women and girls through free, safe, and legal abortion is only just beginning.

This article was originally published on the LSE blog.

Tallulah Lines is a PhD candidate in politics at the University of York and a research associate at the Interdisciplinary Global Development Centre, currently working with the ReGHID project.