Given the lifting of many COVID-related restrictions on international travel, the ReGHID project held its first “in-person” project meeting from 01 – 03 March 2022 in Bogota, Colombia. All Co-Investigators and Members of the Advisory Board had been invited and the gathering was hosted by the team at the University of the Andes at its campus.
The meeting’s main objective was to provide a forum for the Co-Investigators in attendance to present the results of the research carried out to date, and to provide an opportunity to discuss and provide cross-feedback with the work related to the southern migration corridor (Venezuela-Brazil and Colombia; and Mesoamerica). Outputs, dissemination, and impact plans were also presented and discussed with Advisory Broad and key stakeholders.

Colleagues and authorities from Universidad de los Andes opened the event, welcomed the participants and together with Prof. Pia Riggirozzi, ReGHID Principal Investigator, laid out the main objectives of the event. Pia reviewed ReGHID’s main objectives: 1) to identify sexual and reproductive health needs of migrant women from Central America to Mexico and from Venezuela to Colombia and Brazil; 2) to analyse the sexual and reproductive health challenges faced by displaced women and girls; 3) To assess the impact of these displaced persons on local health systems; 4) To produce primary data on patterns of gender inequality that affect access to relevant services.
Presentations during day 1 focused on data collected, methodology of analysis and emerging themes. The Advisory Board actively engaged providing comments to current progress of outputs, and suggestions for impact activities, and dissemination.

Co-Is from Fiocruz, Brazil, kicked-off the round of presentations and shared the findings from their survey carried out on a population of 2000 Venezuelan migrant women and adolescents in Manaus and Boa Vista, Brazil; and their plans for quantitative analysis based thereon. Duca explained the methodology, sampling methods and that the survey had been carried out in the cities of Manaus and Roraima due to their proximity to the border with Venezuela and the concentration of migrant population. The team presented preliminary analysis on demographics and statistics showing characteristics of the migrant population identified in Manaus and Boa Vista and compared categories such as: level of education, economic resources, among others, and reasons for migration, and SRH status and conditions during migration and beyond.

Co-Is from Universidad Federal de Maranhão, Brazil, presented the results of their qualitative analysis based on interviews done not only with Venezuelan migrant women and adolescents, but also with local authorities in Sao Luis, Manaus and Roraima, Brazil. The qualitative team explained that their fieldwork included the territories of Manaus, Boa Vista, Pacaraima and Sao Luis. Given that the subjects interviewed consisted of adult and adolescent women with different sexual orientations, ethnicity and gender identities, the population was both complete and complex. A total of 138 women were interviewed, 129 of whom answered the sociodemographic questionnaire.  Amongst the techniques implemented were semi-structured interviews, focus groups (transcriptions are nearly completed), life story interviews, and participant observations.

Bruna Curcio project photographer based in Manaus, Brazil presented her recent photographic work that will form part of the photobook (“Visualising health in displacement: gendered struggles of care, violence and healthcare”) that will soon be published as part of the project. Bruna and Tallullah Lines, University of York Co-I described their work which had employed photovoice and photobook methodologies. It had involved photographs both taken by, and featuring, Warao migrant women and non-indigenous Venezuelan migrants based in Brazil. They stated that 31 photographers had taken part across 2 refuges – ‘Abrigos’ – and 1 shelter. The topics addressed related to a) Self-care and care for others; b) Gender-based violence in the forced displacement of people; c) Addressing barriers to access SSR services. The images and testimonies in the book were provided by migrant women and adolescent girls invited to be part of this research project, offering their views and perspectives on the challenges of sexual and reproductive health that Venezuelan women and girls on the move face because they are female and because they are migrants. The photobook is almost ready for translation (English, Portuguese, Spanish) and for production.

Likewise, a short trailer of a video documentary in the making was also shared, featuring some of the migrant venezuelan women residing in Brazil can be accessed here: video . Members of the Advisory Board had the opportunity to ask questions and made comments on the presentations made.

Co-Is from FLACSO El Salvador, presented their qualitative work with migrant women and adolescents in the Meso-american corridor. They contextualized the migratory flows in Central America and stated that in recent years migration has largely taken two forms – the “caravana” phenomenon of accompanied groups and “drip”.  The principal drivers of migration being violence in forms of gang-violence, GVB and others in the countries of origin.  In recent years transoceanic migration has also been observed, from Haiti, Venezuela and Africa. Given its proximity to the border, Tapachula is a key place between Mexico and Guatemala as one of the points in which the largest number of migrants are concentrated, mainly due to the policy of the Mexican government which states that migrants must wait there until they receive their documentation (papers).

The emerging themes presented were based on 97 semi-structured interviews of migrant women and adolescents – the majority from Honduras – as well as women forcibly returned to the country had been carried out to date. Service providers and stakeholders from a range of government authorities, international organisations and civil society from Mexico, EL Salvador and Honduras were also interviewed. The team gave details of the fieldtrip to Tapachula, carried out with the involvement of Fundacion Chimumi, and stated that one of the biggest challenges identified was the inability of overwhelmed healthcare providers to provide a service. See presentation and emerging themes in the link in the annex at the end of this document

Co-Is from Southampton University and OIM are working collaboratively on the survey of migrant women in Mesoamerica, which is planned to take place in 2022. A pilot of the suvery was already implemented and IOM staff took place in a training session led by Sarahi (UoS) for conducting the pilot. The timeline for implementation of the quantitative analysis is imminent. The survey’s main objective is to identify needs and barriers during their journey. The aim is to survey 550 returnee women in reception centres in their country of origin. The instrument will have 12 modules which will evaluate the following: identification; migratory journey; women’s health; reproductive history; pre- and post-natal care; childbirth and postpartum; discrimination and violence; health-related lifestyles; access to services; education and employment; health status; return/deportation centres and shelters. The survey will be carried out in the following reception centres: GAMI (Migrant Care Management, San Salvador), Belén and La Lima in San Pedro Sula-Honduras. Important considerations to bear in mind are time, and security requirements which may necessitate adaptation of the survey.

The Colombian team led by Jovana Ocampo presented the different work packages in their remit and the AGAPE guide. The 1st package was concerned with the identification and characterization of the needs in SRH of Venezuelan migrant women in the city of Bogotá. For this, groups of adult and adolescent women, key actors and sex workers from the Santa Fe neighborhood were interviewed. The 2nd package focused on the creation of a comprehensive health care pathway focused on migrant women, with the participation of migrant women through the implementation of action-participation research. The 3rd package focuses on the creation of a peer training strategy in SRH which, designed in conjunction with migrant women and is expected to be replicated and applied by themselves as managers and agents of knowledge.
The AGAPE guide is co-produced with migrant women from Venezuela in Colombia. The guide extracts information that is relevant to migrant women and girls as regards SRH. This process of co-creation has been developed over time and emerged from the use of playful – pedagogical methodologies. The AGAPE guide’s objective is to serve as an instrument for migrant women to know through their peers about their SSR rights. This idea was captured in a short video produced by the University los Andes team in collaboration with the Procrear Fundation, Colombia, which was shared with the meeting.

The meeting provided all members of the ReGHID team with an invaluable opportunity to share the progress made so far. All attendees were able to participate in constructive discussions and Q&A sessions. On the last day participants agreed on the next steps and proceeded to define their forthcoming plan for publications (articles, books, Lancet Special Issue, etc), dissemination and impact activities. Prof. Pia Riggirozzi, ReGHID’s Principal Investigator closed the meeting, thanked all Co-Is and Advisory Board members for their very engaged and insightful contributions and provided a summary of the event. 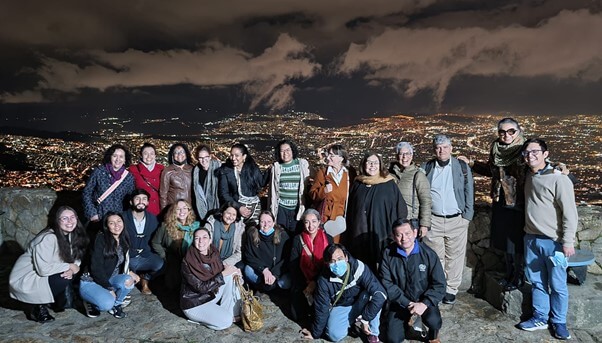